Features In the Field Industry
Take to the Sky 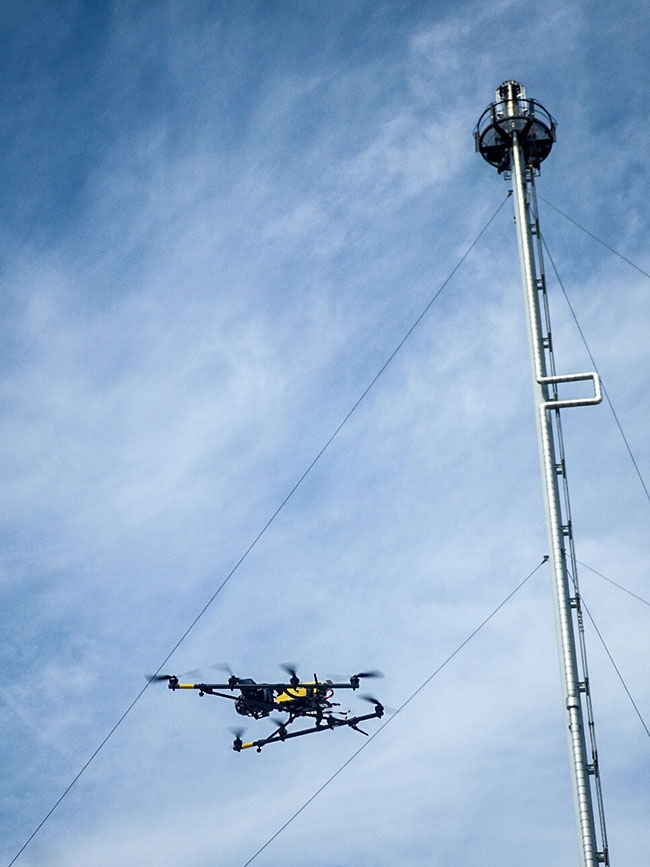 The inspection segment is expected to represent 30 per cent of the commercial drone market through 2020. Photo: The Sky Guys

The use of drones for industrial inspections, primarily in oil and gas, energy, infrastructure and transportation, is an opportunity that early mover companies like The Sky Guys have seized upon.

“Drones offer incredible opportunity to save time, save money and to remove the human risk from acquiring essential data,” says Adam Sax, president and CEO, The Sky Guys.

With offices in Toronto, Vancouver and Alberta, The Sky Guys is billed as both a professional service and technology company, landing projects in such varied industries as oil and gas, manufacturing, construction and engineering, infrastructure and travel and tourism.

The overall UAV/drone market is expected to reach global market revenue of more than $6 billion in 2017 and grow to more than $11.2 billion by 2020, according to Gartner, Inc. But while the market for commercial drones is much smaller than the demand for personal drones, it has a significantly higher average selling price, higher payload, longer flight times, as well as redundant sensors and flight controllers to make them safer.

A USE FOR MAINTENANCE
Progress monitoring and asset inspections are the primary value from a maintenance and reliability perspective. “The ability to monitor and track equipment in the field in real time or on an ongoing basis, or the ability to do inventory management and volumetrics on any sort of materials is a real value add,” Sax says.

Earlier this year, The Sky Guys started using its drone technology for surveying and inspection services at the General Motors plant in Oshawa, Ont. The drones are equipped with integrated sensors that map out thermal data for the entire plant and provide critical inspection data at a fraction of the traditional cost and speed, Sax says. While a high-resolution camera takes high-resolution photographs, a thermal camera maps thermal images. The data from both cameras are used to stitch together to create 3D maps.

“General Motors can use the thermal maps to inspect entire structures or identify faults or areas that need work, identify heat loss or areas where water pooling will become an issue now or in the future,” Sax says, adding that the drones inspect all critical areas, including flare stacks by ensuring they are tied down and that there is no critical infrastructure damage in need of repair.

To help their clients analyze the data, The Sky Guys has developed a secure cloud network, which allows them to share data and their clients can view it on any device that connects with the Internet – mobile phone, tablet or computer. “The information they see is almost like Google Earth since they can see their asset and click on different layers, such as maps, topography, renderings of structures, and they can zoom in and get up close to the assets.”

SECTOR INNOVATION
In the power and utility sector, where there is a huge need for inspections, drones are becoming a solution, Sax says. Power utilities traditionally use LiDAR (light image detection and radar) for inspecting assets. The Sky Guys took this as an opportunity to develop the first LiDAR drone for the Canadian market and started using it successfully a year-and-a-half ago at EPCOR Utilities, Edmonton’s power and water utility.

In the mining sector, The Sky Guys have used drone technology primarily for mapping, surveying and topography, for exploratory work in rural areas in northern Canada, as well as in processes, such as water sampling.

Drones are becoming a huge value source and can be highly effective in helping reduce costs by getting critical information to help reduce liability in environmental terms, Sax says. “The ability to map an area in a short period of time at a low cost on an ongoing basis is a huge value. We look at the environmental issues in mining, like tailing ponds.”

OVERCOMING CHALLENGES
According to Gartner research, the inspection segment is expected to dominate with 30 per cent of the commercial drone market through 2020. But while businesses using drone technology in pipeline inspections or power and utility inspections recognize the benefits, there are some hurdles to overcome.

For one, Sax notes, “drones fly at most for 20 minutes and can range in cost from $80,000 to $200,000 each.” Another problem is that drones are susceptible to weather conditions. (“Rain or high winds would create real roadblocks.”)

When Sax started his UAV business in March 2015, he soon learned that “technology wasn’t quite where it needed to be” if his company wanted to provide the best solutions for industries. That is why, in 2016, The Sky Guys scaled up by adding a technology division, Defiant Labs, as a way to develop proprietary commercial drones and develop software with a focus on artificial intelligence and deeper learning that would allow them to process data and create actionable insights in real time.
Thanks to this research and development arm, The Sky Guys are currently refining their latest offering, the DX-3, which is essentially a fixed-wing, long-range drone with a 12.5-foot wingspan that can assemble and disassemble within five minutes. The drone is designed with proprietary ducted fan technology in the body so that the craft doesn’t require a runway, says Sax. The robust design also allows for 24 hours of flight in all types of weather and can be used for out-of-visual-line-of-site operations. “We believe this is really a game-changing product that we’re bringing to market in 2018,” he says.

SAFE BETS
Sax says that his team routinely comes across companies recognizing the value of drone technology and who consider investing in their own equipment. But while The Sky Guys will work with clients to develop in-house talent, companies invariably revert back to subcontracting services from them, he says.

“The primary reasons for that are the continuous investment into the equipment and maintenance of the equipment becomes extremely expensive,” Sax says, noting that The Sky Guys also offers certification for UAV pilots through a ground school certification, as well as in-school training classes for its professional services clients.

“The ongoing training and education, the continuous change of regulations and the combination of all that becomes burdensome for companies,” he notes. “As well, from a liability standpoint, hiring a professional company with a sole focus on data collection using drones removes a lot of the risk and liability than doing things in-house.”

ONWARD AND UPWARD
With strong financing and partnerships, the The Sky Guys are en route to becoming a global enterprise. The company is moving into the United States this year and Sax projects the company will provide products, services and software to the global market by 2018.

Sax sees the future of all of the company as being built around the data it collects – as opposed to the drone that’s collecting it – and providing actual insights using artificial intelligence.

“If you know power and utilities and pipelines, the value is in the ability to not only take photos of pipelines but to have the drone learn from the data and perform tasks, such as fault detection and off-gas detection and to report on that in real time,” Sax says. “The ability to have the drone fly autonomously while considering the environmental impact at or close to the pipelines and be able to provide analytics in real time – that’s where we’re headed. And the more AI and machine-learning type technology that we can develop, faster, the more value we will provide for our clients. That’s our long-term strategy. And we’re getting there.”

Rehana Begg is the editor of Machinery and Equipment MRO. Reach her at rbegg@annexweb.com.
Print this page