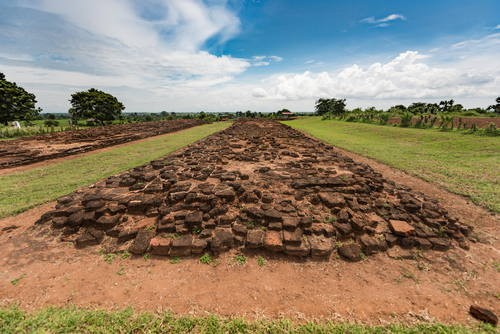 Halin is one of three Pyu Ancient Cities in the Ayeyarwady River basin protected by UNESCO. The Pyu Kingdoms flourished for more than 1,000 years with advanced agriculture. (Photo: SimActive)

The Correlator3D product developed by SimActive is being used to map the UNESCO World Heritage Site of Halin in Myanmar. Halin is one of three Pyu Ancient Cities in the irrigated landscapes of the Ayeyarwady River basin. The designation include the remains of three brick, walled and moated cities including, Beikthano and Sri Ksetra, as well as Halin.

UNESCO World Heritage explains the three ancient cities, which are only partly excavated archaeological sites, reflect the Pyu Kingdoms that flourished for over 1,000 years between 200 BC and AD 900. Remains include excavated palace citadels, burial grounds and manufacture sites, explains UNESCO, as well as monumental brick Buddhist stupas, partly standing walls and water management features – some still in use – that underpinned the organized intensive agriculture.

SimActive explains the archaeological project involved the deployment of drones to gather data necessary to prepare orthophoto maps and digital elevation models, with the goal of finding new features as well as to assess the state of the known ones. These include monumental walls, dams and digging canals many of which are still visible in the landscape. SimActive explains the resulting geospatial data also allow to check if modern constructions or farming are not causing any damage.

“Our collaboration with SimActive is allowing us to produce highly accurate maps of an historic site that is more than 2,000 years old,” said Kasper Hanus, research fellow at The Institute of Mediterranean and Oriental Cultures of the Polish Academy of Sciences. “The datasets help us understand the past civilizations and safeguard the common heritage of mankind.”