Features In the Field Industry
Robo Birds at Edmonton International 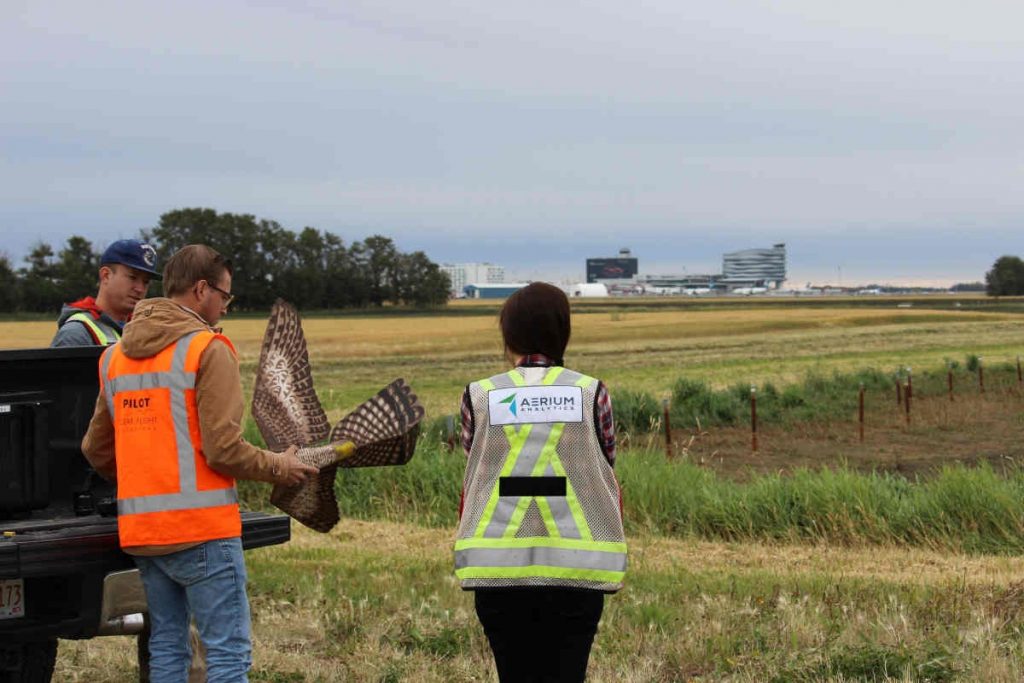 The unique Robo Bird project at Edmonton International Airport was led by Aerium Analytics, which holds more than 30 years of project management in the energy and forestry sectors. (Photo: Aerium Analytics)

An Unmanned Aerial Vehicle (UAV) masquerading as a peregrine falcon was the star flyer in a successful three-month trial last year of its effectiveness in bird scaring at the Edmonton International Airport (EIA).

Its combined use with propeller-driven UAVs are a world first, according to Calgary, Canada-based Aerium Analytics, which operated the machines. Aerium holds more than 30 years of project management in the energy and forestry sectors.

By trial’s end in mid-October 2017, the airport had concluded that the use of the falcon, called Robird by its developer, Netherlands-based Clear Flight Solutions, had been safely incorporated into the day-to-day operations of the airport, and did scare away birds.

“There were no safety or operational concerns at all,” says Steve Maybee, vice president of operations, EIA. EIA does not have enough data yet to do a cost-benefit analysis, compared to its traditional bird scaring methods, but, says Maybee, “We will be continuing the program next year to compile more data on spring, summer and fall conditions, as well as operating in areas of the airport that were not made accessible this year.”

Tens of thousands of birds, representing around 170 species, visit the airport’s 7,000 acres (2,800 hectares) a year. Higher priority species for management include larger birds such as hawks and owls, and especially larger flocking birds such as gulls, and waterfowl.

“No one tool does everything and the trial of the drone was looking at its suitability as a new tool in the toolbox for bird control. Aerium has a varying number of UAVs located at the airport – a combination of numerous Robirds and multi-rotor drones for various purposes.”

EIA contracted Aerium Analytics, which has a use agreement with their partner, Clear Flight Solutions, to operate the drones. “Currently there are only two airports in the world which utilize the Robird. As this technology has only been recently adopted into airports, EIA was the first in the world to integrate both Robird and other quadcopter UAVs into daily operations,” says Jordan Cicoria, a managing director with Aerium Analytics.

Robird looks and flies like a falcon. “The Robird is a true ornithopter. The only means of propulsion are by the flapping of the wings, which scoops the air to propel the Robird forward. The V-tail design is utilized for steering and control of the Robird. The frequency of wing beats per minute is similar to that of an actual peregrine falcon as well,” Cicoria explains.

Safety features in the UAVs, and safety protocols developed by Aerium Analytics and EIA Operations, in consultation with NAV CANADA and in respect of Transport Canada regulations, kept the comfort level with the trial high. “NAV CANADA air traffic control was actively involved in the development of all procedures from the start of planning for these operations,” Maybee says.

UAVs have various fail-safe features, such as automatic return-to-home or auto-land features if operator communication with a UAV is lost, or if there is a loss of GPS connection. UAV flights can be classified in two ways: line of sight (LOS) and beyond visual line of flight (BVLOS) flying. BVLOS is strictly interpreted, and included going out of sight behind a tree or a building. Aerium Analytics did no BVLOS flights.

“BVLOS flights are generally not allowed by Transport Canada and we did not want to make an already complex operation more complex until all the procedures and protocols were proven to work,” Cicoria notes.

All operations were approved by EIA Operations and NAV CANADA in advance. “Daily operations adhered to a strict schedule and air traffic control was aware of all UAV operations at all times. No flights occurred within the approaches of each runway and all operations remained outside of Critical Area B [164 feet or 50 metres from edge of runway],” Cicoria explains.

“Airport staff were aware of all operations and in communication with Aerium operators daily,” Maybee adds.

Flights began in mid-July. Aerium flew both the Robird, and quadcopters manufactured by Switzerland-based senseFly and Shenzhen, China-based DJI. Cicoria describes some of the action: “Overall, the Robird chased over 6,500 birds during the three-month operation and Aerium’s team interacted with over 13,000 birds. We did encounter other predatory birds who may have felt threatened but our pilots know how to interact with these birds to minimize any risk to them.

“The understanding of avian behavior is critical and all our pilots and observers are trained in this. In order to be successful at flying the Robird, not only do you have to have great control of the Robird but you also have to think like a falcon. You need to understand how the birds will react to your presence and how to effectively disperse them and “herd” them in the right direction out of harm’s way. Lastly, there are two distinctive techniques we utilized. Those were to chase birds, and then to change behavior and make birds stay away, which takes time and vigilance.”

Too, Cicoria adds, “Coupling Robird with traditional bird scaring methods like pyrotechnics and acoustic hailing devices showed good success.” Aerium Analytics also conducted inspection and survey operations for the airport. (While the Robird had no on-board camera, the quadcopters did.)

Maybee adds, “At this point it is fair to say that Robird is effective at keeping birds away from the airport. Robird would not replace all other methods, but works well in concert with them. For example, waterfowl will typically stay on the water if they see a falcon hunting. If the water fowl are first scared in to the air by pyrotechnics, the Robird then becomes effective at driving them away from the area.

“The drone is also more controllable than a live falcon. Its principle limitation is that it cannot be used in high winds. At this point the regulatory requirements limit its use to only under the control of two humans, but in future it may eventually become automated. There is also a height restriction on Robird operations, but this could conceivably be lifted, which would make the drone more effective, because birds would be more concerned if they see what they perceive to be a hunting falcon above them, able to strike quickly.”

Aerium Analytics and EIA cite numerous factors that contributed to the trial’s success: “The key aspects to our work were safety, communication and trust. It took a long time to ensure that everyone felt comfortable in the procedures that were in place, and we all agreed that we must leave no stone unturned before we could proceed safely,” Cicoria says.

Maybee adds, “Aerium draws experience from over 50 years of field operations in numerous industries such as oil and gas, and forestry, and has high standard of safety. These qualifications along with the professionalism shown during the planning process are why this project proceeded.”

Looking forward, Maybee comments, “Like most technology, there is an initial investment but after it is in widespread use, the cost will come down. We view this pilot as a long-term investment.”