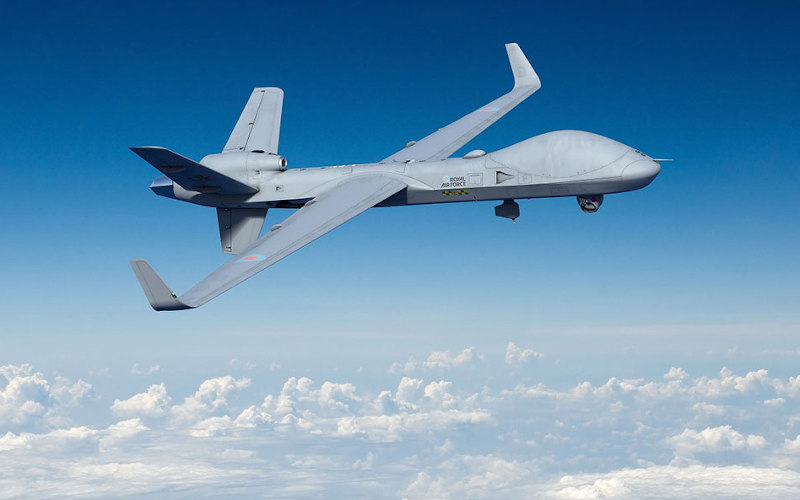 MQ-9B SkyGuardian is the baseline system that will become the Protector RG Mk1 when configured for the Royal Air Force. (Photo: General Atomics)

General Atomics Aeronautical Systems Inc. signed a contract with the UK Ministry of Defence for the manufacture and delivery of 16 Protector RG Mk1 Remotely Piloted Air Systems. This includes an initial order of three Protector platforms with an option for an additional 13 aircraft.

“This is a major milestone for the MQ-9B system and the Protector Program,” said Linden Blue, CEO, General Atomics Aeronautical Systems (GA-ASI). “We look forward to delivering this new generation of MQ-9 to the Royal Air Force.”

GA-ASI’s MQ-9B SkyGuardian is the baseline system for what will become the Protector RG Mk1 when configured for the Royal Air Force (RAF). This RAF configuration includes  UK weapon systems and X-band satellite communications (SATCOM) to allow for aircraft self-deployment Automatic Takeoff and Landing. This SATCOM capability eliminates the need for forward-based launch-and-recovery equipment and personnel.

The first Protector RG Mk1 aircraft is scheduled to be delivered in 2021, even as it will remain in the U.S. to be utilized in a test and evaluation program. Shaun Gee, Group Captain and RAF’s Director Air ISTAR programs, notes the Protector’s ability to fly consistently for up to 40 hours will offer a vastly improved ISTAR capability – Intelligence, Surveillance, Target Acquisition and Reconnaissance.

“Given that it is designed to fly in non-segregated, civil airspace, the Protector RPAS [Remotely Piloted Air Systems] will also be able to support multiple civilian missions, including search and rescue and disaster response missions,” said Shaun Gee, Group Captain and RAF’s Director Air ISTAR programs.

GA-ASI’s development of MQ-9B began in 2014 to deliver an RPAS that meets STANAG-4671 UAV System Airworthiness Requirements, which provide the basis for type certification by NATO member-state military airworthiness authorities.

The company states the MQ-9B and its internally developed Detect and Avoid System (DAAS) are built for adverse weather performance with lightning protection, damage tolerance and de-icing systems. It provides for rapid integration of new payloads with nine hard points, according to GA-ASI. In addition to the SkyGuardian, MQ-9B is also available as the SeaGuardian for maritime missions.

The MQ-9B has also been selected by the Australian Defence Force. The Government of Belgium has also approved Belgian Defense to negotiate the acquisition of MQ-9B.