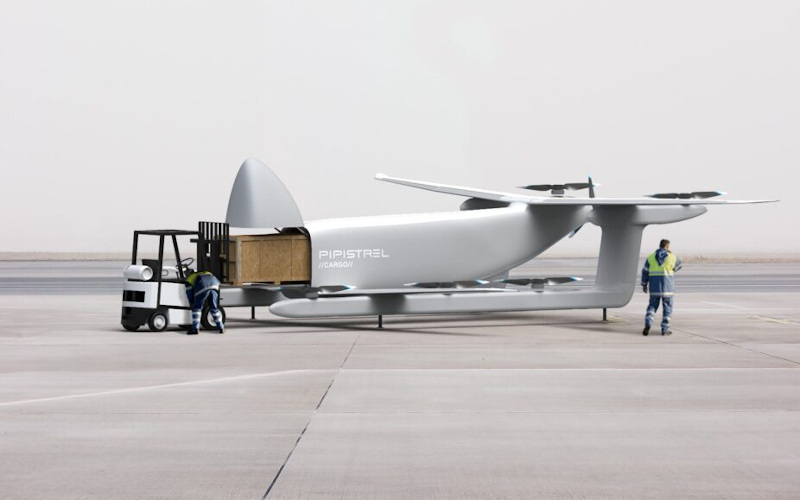 Pipistrel of Slovenia, one of the aviation industry’s electric-aircraft pioneers, introduced the Nuuva V300 concept as a long-range, large-capacity, heavy-weight autonomous eVTOL UAV for logistics and aerial cargo delivery. The company is already taking orders for the aircraft, targeting entry into service for the second half of 2023. A smaller Nuuva V20 model is also being developed for last-mile delivery missions.

The customizable Nuuva V300 is being targeted to carry up to 460 kilograms. Initially, the company expects a 50-kg payload will be available at a 2,500 km range (depending on fueling requirements), focusing on altitudes as high as 8,000 feet. At lower take-off altitudes and with shorter mission requirements, Pipistrel projects the payload can be increased to up to the 460 kg mark.

Its cargo compartment aims to accept up to three Euro-pallets (EPAL) that can be loaded with a regular forklift. The Nuuva V300 would then autonomously fly a preloaded flight plan. The Nuuva V300 will take off and land using eight independent battery-powered Pipistrel E-811 electric engines, already Type Certified. The aircraft’s batteries will be charged by plugging in to a SkyCharge by Pipistrel and Green Motion charging station.

The V20 will share the same architecture as the larger V300, but it is being designed as a lightweight cargo courier carrying payloads of up to 20 kg. Pipistrel expects first customers will be able to take deliveries of the V20 as early as 2021.