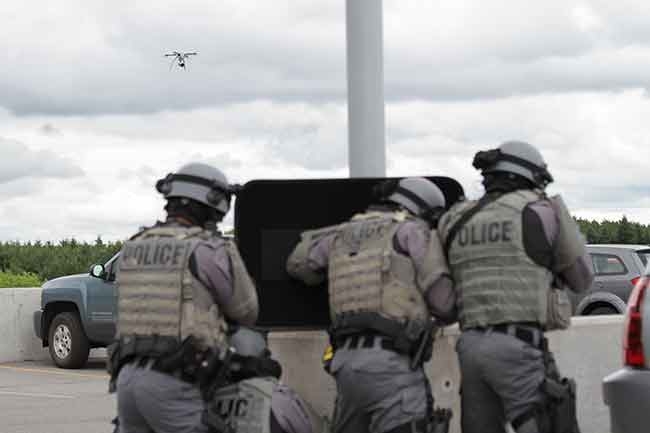 If ever we were on the cusp of a revolution in aviation, this is it. It’s even bigger than TCAS, or TAWS or glass cockpits. For the helicopter community, I would argue that this is almost as big as turbine engines or Swash Plates.

UAVs are everwhere. They will perform many of the functions of a conventional manned helicopter – aerial survey, pipeline and power line patrol, long-lining, to name a few – at a significantly reduced cost. Their use is growing exponentially.

If UAVs were living creatures, they would be rabbits. Their evolution and the application of the technology is limited only by the imagination of designer and the operator. They occupy the same low-level airspace as conventional manned helicopters. The potential for conflict is high.

HAC has been monitoring the deliberations of the Program Design Working Group, Phase I, and we were satisfied with its outcome in-so-far as commercial operations were concerned.  Our biggest concern is the recreational use of these aircraft. Sadly, when the first mid-air occurs, the operator of the UAV could conceivably dispose of the Control Module, and disassociate himself/herself from the event.

In spite of Transport Canada’s (TC) Public Awareness Campaign, there is still widespread disregard for the safety of manned aircraft by recreational users, and I believe that this represents the largest risk to helicopter safety in Canada, today. The question is, how will TC put the Genie back in the bottle?

We have also been considering the Phase II Report, and I must say that that they have an incredibly complicated and difficult job. The subject of Phase 2 is addressing the requirements associated with the operation of all categories of UAV systems where the UAV MTOW is 25 kg or less and the UAV is operated BVLOS (Beyond Visual Line of Sight) under visual flight rules (VFR), day or night, or instrument flight rules (IFR).

While the implementation of their recommendations is still years away, the recommendations of the Phase II Working Group consider a broad variety of scenarios that will go some distance to providing other users of the airspace with comfort, including ADS-B “out”; medical standards for UAV pilots; mandatory training and licensing standards for UAV operators and maintenance engineers; the use of detect, sense and avoid technology (for other aircraft and terrain and obstacles); maintenance standards; flight termination capability, to name only a few. I was impressed that the commercial UAV community has taken a conservative and cautious approach to the use of UAVs.

While the operators of UAVs are obliged to integrate their operations in to the established airspace structure, and to ensure that their aircraft can be safely integrated with the operation of other aircraft, I think that it is inevitable that conventional manned aircraft will be driven to adapt to the presence of these new aircraft – including technology that will allow them to sense and avoid UAVs.

The reality is that these new aircraft are here to stay, and their use will only continue to become more popular. Conventional manned helicopter operators need to adapt to their presence and potentially even capitalize on their use, by applying the discipline that they bring to manned aircraft operations, and offering those complimentary services to their existing customers.

Fred Jones is the president/CEO of the Helicopter Association of Canada and a regular contributor to Helicopters magazine.
Print this page