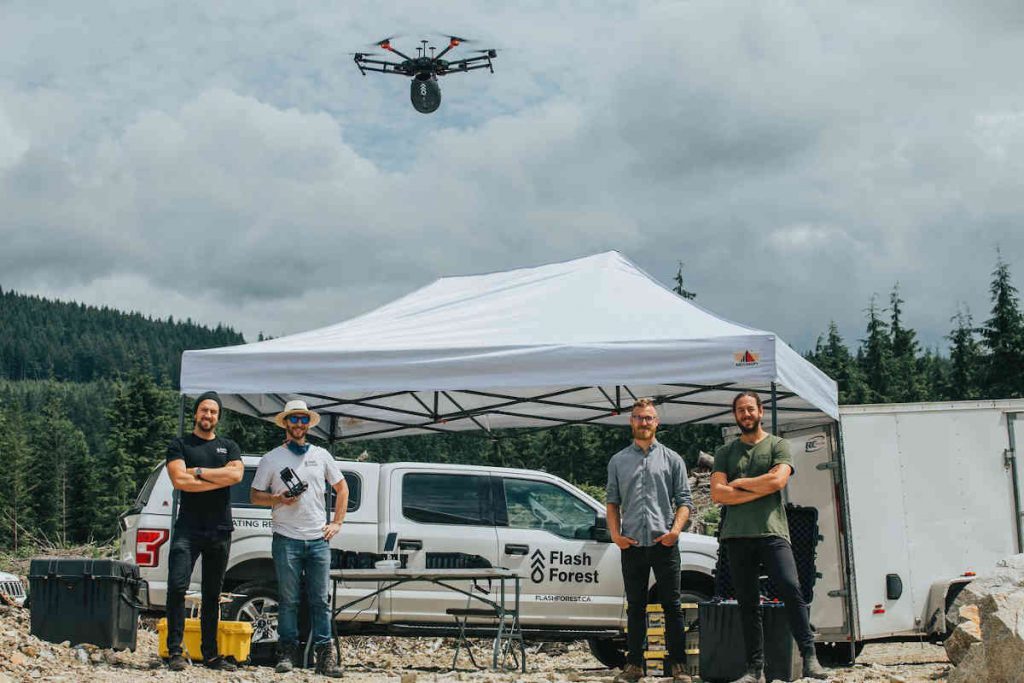 Across the world, forests are destroyed much quicker than they are replenished. Flash Forest wants to help fix that.

The fast-growing Toronto-based startup aims to plant one billion trees by 2028, and has assembled a team of botanists to develop optimal seed germination rates, and engineers to build and program drones to deliver them.

“It’s a material way of tilting the scales for the climate,” said Cameron Jones, the company’s 33-year-old chief operating officer.

While traditional methods of planting involve greenhouses full of seedlings and workers with shovels each planting perhaps 2,000 of them in a day, Flash Forest has worked out how to deliver around 40,000 pods (packages including seeds and ingredients to aid their growth) a day per drone. One worker can oversee three drones.

Not all of those seeds will ultimately grow into trees, but Jones says Flash Forest is investing heavily in research, development and testing with the aim of delivering cost-effective results to a growing list of customers.

Jones had worked in public policy, including helping Alberta’s former NDP government develop its climate policy before joining his brother Bryce and Angelique Ahlstrom in co-founding the company in 2019.

That plan included a consumer carbon tax on fossil fuel products, which raised about $2 billion a year that was mostly rebated to low- and middle-income families with some funds used for green initiatives. It was scrapped by the current UCP government of Jason Kenney.

“I got bogged down by the bureaucracy,” Jones said of his move into the private sector. “Every time there’s a change in administration, you are undoing the work you were doing before.

“I felt that I needed something more tangible and faster for climate change because we don’t have time to sit around and wait on bureaucracy,” he said. “We have to take matters into our own hands.”

Canada’s federal government has committed to planting two billion trees by 2030 at a cost of up to $3.2 billion.

While initially focused on getting its technology working in Canada’s boreal forests and other biomes, Jones said the company plans to expand to Hawaii to test out working in tropical environments later this year and to start working in Europe early next year.

“We’re trying to help rewild the European Union,” Jones said. “They want to increase diversity, they want to get these forests back to what they originally were.”

After that, Jones says the company wants to turn to Brazil and Borneo, sites of major deforestation over recent decades, countries like Australia with arid environments prone to wildfires, and Africa’s green belt where desertification is steadily encroaching.

“If we want to change how reforestation is done, transform that industry, we’re going to have to take this to every corner of the planet that we can,” he said.

The company is far from profitability, choosing instead to focus on growth. It has completed two rounds of financing — an early friends and family round that sought $200,000 and ended up netting more than double that, and an equity round late last year that raised over $1 million — and plans another raise later this year or early in 2022.

How it works
When the company is tasked with replenishing an area, it first sends out a mapping drone to get the lay of the land and create a flight path that avoids areas where seeds won’t grow (roads, bodies of water, etc). Once it lands, that information can be shared with the rest of the drone fleet involved in the job.

They can fly as low as three metres above the ground in a cleared area and up to 20 metres above if going atop the canopy, and either drop pods or fire them into the ground at about 180 feet per second.

While the company was producing between 8,000 and 10,000 pods a day over the last year, Jones said the team has since developed its own machinery, tooling and processes that has increased that to around 100,000, with the potential to get up to 500,000 pods a day.

Jones said climate change is already affecting how the startup sources seeds, meaning collecting from further south because the seeds from that area are not able to survive the current climate.