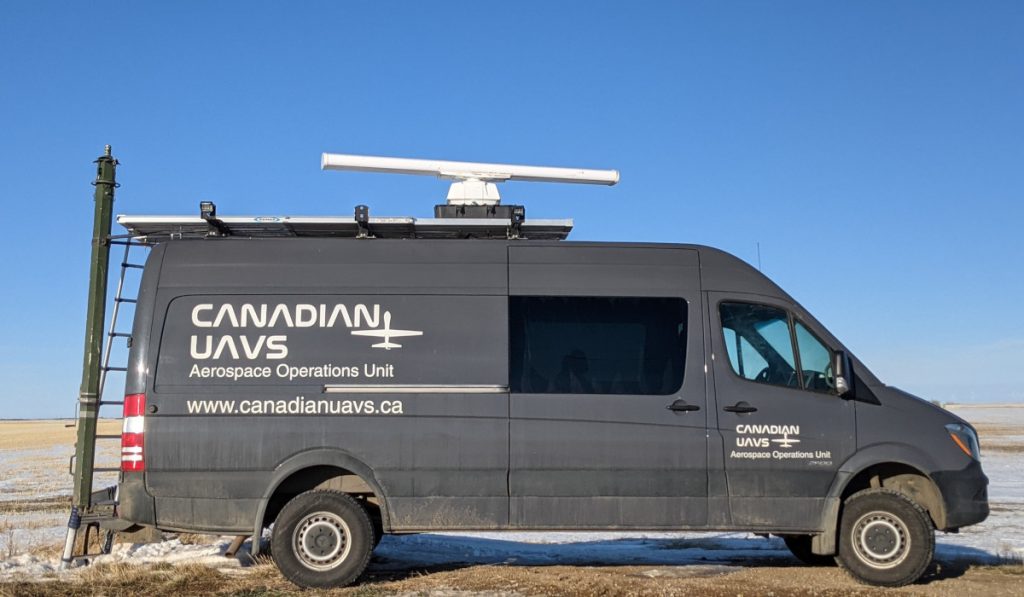 Canadian UAVs, as part of the LOOKNorth Detect and Avoid (DAA) trials, demonstrated the Sparrowhawk Radar as a qualified solution for enabling beyond visual line of sight (BVLOS) Remotely Piloted Aircraft System (RPAS) operations in Canada.

Under observation from Transport Canada and the National Research Council, Canadian UAVs held trials at the Foremost UAS Test Range in Alberta to validate the function of its Sparrowhawk Radar – a low-cost solution for Detect and Avoid (DAA.

Sparrowhawk is much more than a ground-based radar system, explains Canadian UAVs, describing it is a comprehensive technology solution that combines low-cost radars of various forms with computer vision, predictive modelling, data presentation and RPA flight contingency planning. The raw data received from the radar is distilled into an airspace picture and presented to the RPAS operator natively on the ground control station. Air risk is then automatically interpreted during airspace intrusions, explains the company, allowing for emergency procedures engagement by the operator, or automatic evasive maneuvers.

“It is overly simplistic to think you can just buy a radar and start flying BVLOS. We have spent four years selecting and developing the technology, processes, and safety protocols to determine and interpret the fingerprint of an airspace,” said John Molberg, Vice President of Innovation at Canadian UAVs. “We take a holistic view of the entire problem before we start flying BVLOS. This approach takes into account the needs of the company, the customer, the regulator, and of course, other airspace users. We have been working with Transport Canada for years to demonstrate that economic and effective DAA is possible for RPAS operators. Our partnerships have allowed for this innovation to develop organically in Canada.”

Sparrowhawk is made possible through a range of public and private investments in Canadian UAVs Inc. Investment has been leveraged from NSERC, IRAP, Tecterra, LOOKNorth, and most significantly as part of the SkySensus Project, a research and development project under Industrial and Technological Benefits (ITB) funded and led by Peraton Canada. Canadian UAVs explains these investments facilitate its mission of providing the ecosystem for integration of UAVs into complex airspace by helping to “crack” the most difficult problem facing the widespread adoption of RPAS in Canadian skies: Detection and Avoidance of manned aircraft.

“Peraton’s SkySensus ITB investment is an example of public policy made good,” says Chris Brosinsky, Chief Operating Officer at UxS Consulting, and former director of the IDEaS program at the Department of National Defence. “By combining industry demand with ITB funding, this policy is helping Canadian innovators address significant barriers in the emerging RPAS industry.”

Canadian UAVs explains the3 DAA trials, sponsored in part by LOOKNorth, set in motion a series of technology demonstrations to measure the efficacy of different forms of DAA. Canadian UAVs, as part of this demonstration, showcased the effectiveness of its ground-based radar and software by commissioning a manned RV-10 aircraft to fly at the Foremost UAS Test Range.

Canadian UAVs engineers and operators tested detection of the aircraft from 2 NM to 8 NM (15 km) in real-time. The aircraft altitude varied from 400 to 4000 feet AGL with typical and atypical flight paths flown to thoroughly test detection performance. On-board the aircraft was a GPS/IMU tracker supplied by the National Research Council (NRC) to establish the ground truth reference for detection analysis. Sparrowhawk’s performance was assessed against the aircraft’s GPS data to confirm the accuracy and reliability of detections.

“Upon entering Sparrowhawk’s 8 NM surveillance radius, the aircraft was detected within 5 seconds, identified as an aircraft within 15 seconds, and then ongoingly tracked for 90 per cent of the time it stayed within the 6.5 NM surveillance radius. All of this with a horizontal accuracy of 100 metres.” said Mahmoud Abdelrahman, Sparrowhawk Program Manager. “The Sparrowhawk airspace awareness picture is integrated directly into Lockheed Martin’s VCSi ground control station, and that setup showcases the efficiency of interpreting and reacting to a detected air risk, and also its readiness for deployment in commercial BVLOS operations.”

Culminating from this test, and others, Canadian UAVs received approval from Transport Canada to fly <25 kg RPAS in Canadian skies out to 8 NM from the radar for ARC – B and 6.5 NM in ARC-C.

“We aren’t just flying in restricted airspace, or during forest fires. We fly in ARC-C, immersed with other non-cooperative aircraft, out to ranges of 15 km” says Sean Greenwood founder of Canadian UAVs. “We can now effectively fly an entire Oil Sands mine from beyond the fence, which opens up tremendous economic, environmental and safety benefits.”

Each Sparrowhawk Radar installation enables 170,000 acres of airspace for BVLOS operation in ARC-B. Canadian UAVs will continue to develop the Sparrowhawk technology for commercialization in Canada and beyond with our partners Peraton Canada, Foremost UAS Test Range, Aerium Analytics and Lockheed Martin CDL Systems.