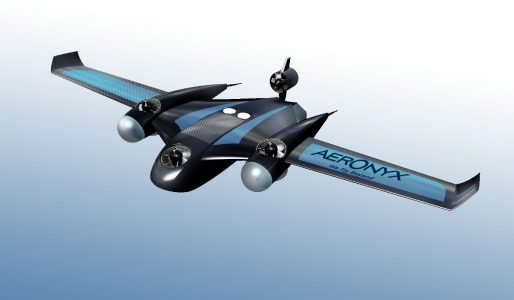 Montreal-based Aeronyx wants to develop the drone delivery market in the Saguenay―Lac-Saint-Jean area. Choosing to establish itself in Alma, the company plans to run tests and start building relationships with local businesses.

Its vision is to offer businesses a new segment in the supply chain that can be called upon when transport issues risk disrupting the transit of goods. “We noticed that interruptions in the production line can cost companies thousands of dollars per hour. We have to come up with an alternative solution to restart production – it’s a vital issue,” declared Jérémy Laplante, Aeronyx’s president and cofounder.

Aeronyx got its start through the SUITE entrepreneuriale Desjardins business incubator program and is a member of Alma’s UAS Centre of Excellence. It currently has three employees.

Legislation
For the moment, however, the company must overcome obstacles posed by Transport Canada’s regulations. Currently, drones cannot transport cargo exceeding 25 kg and deliveries must be within the pilot’s line of sight.

This is why Aeronyx is currently networking to find companies willing to participate financially.

Parallel to these efforts, the company is also lobbying Transport Canada to change its regulations. With more and more actors asking for change, Aeronyx believes the law will have to adapt. “We have to demonstrate that companies are interested in this new market to convince Transport Canada to broaden the scope. Within a year or two, I believe they will be ready to take that step. We’re starting to see it in the United States, with out of sight flights,” reasoned Jérémy Laplante.

Aeronyx believes that it will soon be possible for drones to transport heavy cargo, most notably for companies and hospitals. “There are examples around the world, but we’re still talking about pilot projects focused on a single region. For example, there is a company called Zipline already making medical deliveries in Africa. We want to take it even further.”

Demystifying Drone Delivery
“Many companies associate drones with military applications or small drones that can only carry small loads. We tell them to imagine how things will be a few years from now. If today drones can carry 25 kg, tomorrow it will be 100 kg,” he concluded, pointing out that high capacity cargo drones already exist.

Next summer, Aeronyx will be working on a drone delivery project to connect two strategic points over the Saguenay Fjord. Talks are currently ongoing with a partner based in La Baie.