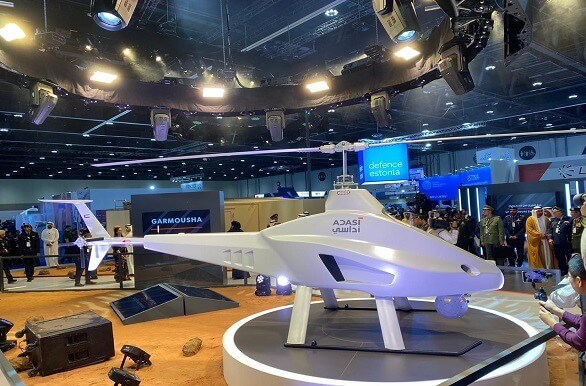 The Garmousha drone is designed to carry payloads of approximately 100 kg, with an endurance of six hours and 150 km. (Photo: Adasi, Edge)

Adasi at Umex 2020, which ended on February 25 at the Abu Dhabi National Exhibition Centre, unveiled what it describes as the first UAE-made, high-performance vertical take-off and landing drone, called Garmousha, in an agreement with the UAE Armed Forces.

The Garmousha drone is a light military unmanned aircraft designed to carry payloads of approximately 100 kg, with an endurance of six hours and 150 km. Adasi explains the Garmousha drone can also be used to detect gas pipeline leaks, to survey infrastructure, and in search and rescue operations.

“Drone technology is revolutionizing our world, creating a safer and cheaper alternative to manned aircraft,” said Faisal Al Bannai, CEO and managing director of Edge, which displayed the Garmousha drone at Umex. Edge is a technology group aimed at defence applications, founded in November 2019. “As an unmanned system, the launch of the sophisticated Garmousha drone helps advance Adasi’s vision for the future of defence, while strengthening the company’s position as the regional leader in autonomous systems and services.”

Regarding its place in the market, Ali Al Yafei, CEO of Adasi, said, “The Garmousha drone is designed to be extremely competitive in the market and will enable us to offer our clients the accuracy required to stay on the leading edge of tomorrow. At Adasi, we are continuously adapting to meet our customers’ needs, and this product underpins our concerted efforts to identify a gap in the market, and act on it.”