Features Resources
The View From Above 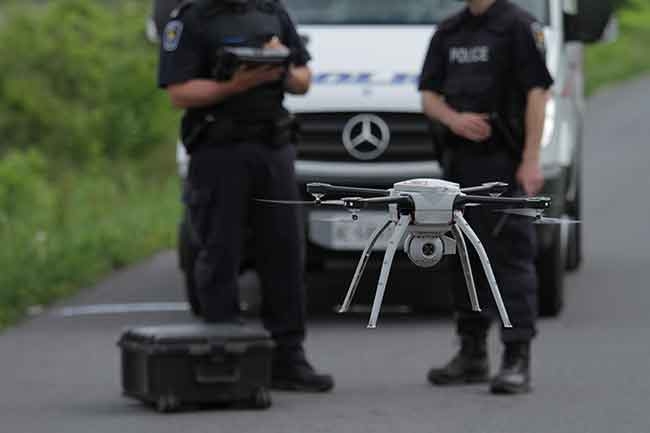 Law enforcement agencies use UAVs for a variety of applications, including accident reconstruction. Photos: Aeryon Labs

David Kroetsch is as cool as the products his cutting-edge firm creates.

Kroetsch is the president/CEO of Waterloo, Ont.-based Aeryon Labs Inc., a dynamic Canadian firm making waves in the international UAV space. Spanning two facilities in a quiet industrial part of the city, Aeryon manufactures the SkyRanger, a UAV that is the platform of choice for domestic and international clients covering a wide variety of sectors such as law enforcement, public safety, military surveillance, oil and gas, wildlife monitoring and more.

Kroetsch recently sat down with UAV to explain the Aeryon way, UAV applications and his take on what the UAV space may look like in the future.

Tell us more about Aeryon Labs and the role it plays in the market.
Aeryon Labs has been around for almost a decade. We were incorporated in 2007 with the intention of bringing drones to the commercial market. Today, we have followed that demand, and find ourselves in military and public safety markets. We sell to the backpack of the soldier, the trunk of the police officer, and the pick up truck of the power line inspector. We focus on the high-end and differentiate ourselves from the toy market. We focus on operators that are trained in other roles – professionals in other vocations using UAVs as tools.

Can you highlight some of your clients and explain applications?
In the military space, our customers are using applications such as over-the-hill reconnaissance to mapping applications. We also have clients in search-and-rescue (SAR), security at airports, traffic accident reconstruction. In Ontario, every fatal accident on major highways is reconstructed with our product. And the OPP has taken accident reconstruction from an hour-and-a-half to 15 minutes with our UAV. Traffic gets moving, which has huge economic impacts. Commercially, we work in oil and gas, pipeline inspection, mapping, mining and other industrial inspections.

Where are we in the UAV space in Canada? Is it the Wild West?
The UAV space is further ahead than aviation was with the Wright Brothers; the technologies are proven. We’re proving the applications where drones can work today. There are a lot of pie-in-the-sky applications out there, with packaged delivery like Amazon, but each of our markets is in a different phase of adoption. The military market really understands what they want a UAV to do: how big it needs to be, how far it needs to see, what radio frequencies it has to operate on. The police market is the next furthest ahead. Transport Canada has been great with its Special Flight Operations Certificate (SFOC). The commercial space is further behind, but the proliferation of toy drones has excited everyone and really driven people’s imaginations to explore applications.

How do you convince companies, operators of a UAV’s value?
Helping the enterprise understand the use of drones and scaling drones is the next challenge. There’s a product component to that, there is a marketing component to that, a case study component to that. We have a great list of stories out there that have proven the concepts and are now looking to scale.

How do you ensure a safe operating environment with the introduction of UAVs in commercial airspace?
Access to airspace is one of the biggest challenges facing the industry today. You have seen it on the road with self-driving cars. The technology is proven, the challenge is getting the inoperable technologies. We have solved the problem on a small scale, and it’s the bigger interoperability challenges with which we are going to ride the coat tails of everything else going on in industry. We are not going to drive it ourselves. Creating a legalized avenue for people to do drone operations is critical – you need to give them a process to follow, tell them it is there. When you do this, more people will become educated because it reduces the liklihood of incidence which is better for everyone.

Is the regulatory environment up to speed with the UAV space in Canada?
The challenge is to ensure technology does not create a backlash in the regulatory process. Creating a legalized avenue for people to do drone operations is critical – give them a process to follow, tell them it is there, and more people will become educated because it reduces the likelihood of incidences, which is better for everyone.

What does the future look like at Aeryon and for various companies utilizing UAVs?
We have moved from the early adopter phase – those who are just trying and experimenting – to the beginnings of pilot programs. At Aeryon, we have gone from the “prove” phase with the Scout, to the “perform” stage with the SkyRanger. The next step is scaling. This is the data story, a more solution-based story instead of just an applied platform in the field. We see also see enormous opportunity growing in the commercial space. Over the past decade, our business has been heavily weighted on military applications. This is changing and access to airspace is the biggest driver, as well as just the awareness and ability of the application of drones to enterprise markets.

Where do you see the industry going?
I want to see drones in the backpack of every soldier, the trunk of every police car and pick up truck of every powerline inspector. We have the opportunity to keep people safe, to keep traffic flowing better, to make sure you are not sticking your head around the corner and being ambushed by bad guys. There are so many ways we can use drones. We sell in 35 countries, including 20-plus militaries around the world. It is great to be a Canadian on the world stage and being a market leader. We also work with a lot of local manufacturers to build our product – so it’s great all around.

Related
UAV maker Aeryon Labs secures $60 million in financing
Drone use takes off
Drones sales in U.S. to double by 2020
A Land of Vast Opportunity